Demolished hulks once used as fishing boats, piles of brick and rubble scattered among palm trees amidst partially destroyed businesses and houses were the first things we noticed upon arriving at the beach in Kalmunai, Sri Lanka. The desolation and destruction caused by the Tsunamis seemed to form an endless array of despair and hopelessness. Flapping in the breeze was a large white flag. Residents told us: “The white flag represents our enormous sadness and grief.” In other areas were clusters of the same white flags only now used to mark mass graves.

Four of us made the trip to Sri Lanka in order to assess the scope of the Tsunami destruction and look for specific ways we could help one town: Kalmunai. Ray Buchanan with “Stop Hunger Now,” Ron Davidson with “Gleaning for the World,” Len Stevens, anchor of our local news television station and myself, pastor of a local United Methodist Church formed the team.

Despite the overwhelming tragedy young children were the first to eagerly greet us and appeared remarkably exuberant as they scrambled to pose for pictures. There were giggles and laughter as we distributed kits filled with household necessities, school supplies, games and Frisbees. Yet, when we mentioned the word “tsunami” their faces became more somber. One little girl spoke of losing her entire family including her mother and father along with three brothers and sisters.

Two images will be ingrained in my heart forever: The first was of a little child’s shoe buried beneath a pile of bricks. Holding the shoe, I could only imagine what must have happened to the little girl who once played on this same street. Another image was simply that of a woman’s yellow blouse billowing gently in the breeze on a tree limb. What was remarkable and tragic at the same time is that the tree limb was at least eight feet off the ground. 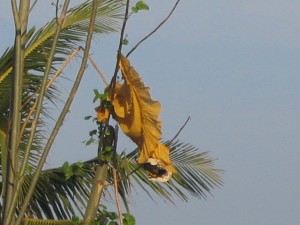 We were told the Tsunami was actually made up of three consecutive waves. Each one would first sweep through the area enveloping everything in it’s path but then the water would quickly recede with a powerful suction that literally swept everything back out to sea. Only hours or even days later would the bodies of the victims wash back ashore. Many have never been found.

Imagine this: The Tsunami struck 11 different countries all around the Indian Ocean. We visited one of those countries. Within Sri Lanka there were over 500 miles of shoreline hit by the gigantic waves… we visited one community populated with almost one hundred thousand people.

Nearly 3,000 people died in this one area: Kalmunai. An elementary school near the beach had sixty-two students…fifty seven died. A church just up the street claimed 350 members… sixty-one gone. A woman approached me with a plastic bag clutched in her hands. She reached inside and handed me a type-written piece of paper describing how she lost all seven of her children to the Tsunami. Then she handed me a white card containing the names, ages and descriptions of each of those seven children. All I knew to do was exclaim, “I am so sorry!” and cry.

Yet, while walking through town, we were frequently greeted with warm smiles and urged to stop for a moment and visit their tent or other place of shelter. Noticeably polite, everyone was eager to offer hospitality and ask one question: “From where did you come?” A few asked for handouts but only a few. Most simply wanted to share their stories and thank us for visiting. When asked what we could do to help them, the answer was nearly always the same: “We want to fish again?”

“Suppose you see someone who needs food or clothing and you say, ‘Well, good-bye and God bless you; stay warm and eat well’ – but then you don’t give that person any food or clothing. What good does that do?” (James 2:15-16) Our group traveled a long way to do something good.

Amidst the rubble, I picked up a cluster of fishing net and showed it to several men as they described their desire to go back to work. “We must fish to survive!” they emphasized. We later learned that for approximately $3,000 they could buy a new boat equipped with a motor and nets. Four families for each new boat could then go back to work. We were beginning to find answers.

Sowing Seeds Ministry set up our web site to accept donations toward those affected by the Tsunami Tragedy. The site is credit card secure and all money will be given directly to Timberlake UMC to be used toward a special project in the area. You may also choose to donate to Sowing Seeds Ministry as we continue to keep our prayer and devotional ministry active and helpful. Click Here

While on deck, holding desperately to anything solid, John noticed several families near the stern serenely singing hymns. He couldn’t believe it! How could they conduct worship and sing in the midst of such a terrible storm? Why weren’t they more frightened? John marveled at their faith and vowed to learn more.