Published by larrydavies on August 2, 2014

For many years, Mell and I wanted to visit New York City but kept finding excuses to postpone the trip: too busy, too cold, too hot, too dangerous or too expensive. This year, I was given several weeks off as renewal leave, so we decided to use part of the time to visit New York City and cross a few items off our “Bucket List.”

Ride a train – We took the Amtrak from Lynchburg to New York and back.

Tour the city – Rode the top of a doubledecker. 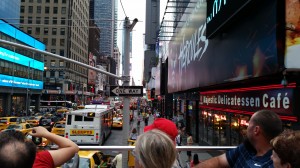 On the doubledecker bus tour, we saw the beautiful architecture throughout the city and as we passed through the various neighborhoods we were told of huge cultural changes over the years. One area that was once Italian became chinese, an African American area became Hispanic. We were told how different languages and various cultures were living and working together, not always easily but eventually adjusting and transforming.

At times, I confess to being intimidated by the crowds, the confusion of trying to get around in a large city, the street vendors, the long lines and high prices for everything. Then there were all these people in costume or practically no costume trying to get their picture taken with you (for a fee). We were at various times, excited, scared and thrilled, confused and bewildered. New York City is a different world for me.

In the midst of the crowds and confusion, I also witnessed beautiful examples of New York City kindness and hospitality toward strangers. One example happened as we stood outside the ABC studio to watch the taping of Good Morning America and saw Robin Roberts, one of the anchors, deliberately make the rounds throughout the studio to talk to the audience. To each person, she shook their hand, said a few words of encouragement and thanked them for visiting. It was as if you were a guest in her home and she was the charming host.

On the tour bus, there were technical problems with the earphones providing multiple language translations. The tour guide stopped everything to help each person find the right channel that contained their language so they could hear and appreciate what was being said. With each person he would listen carefully, help them and then pat them gently on the shoulder as a gesture of encouragement.

There are certainly plenty of examples of hospitality in Scripture:

“Dear friend, when you extend hospitality… even when they are strangers, you make the faith visible.” 3 John 1:5

“Friend, you have no idea how good your love makes me feel, doubly so when I see your hospitality…” Philemon 1:7

“Be sure to welcome our friend Phoebe in the way of the Master, with all the generous hospitality we Christians are famous for.” Romans 16:1

More than ever, I have come to value and appreciate where I live, our culture, our values and our lifestyle. Our area in central Virginia is not so crowded, so busy or so commercial. But at the same time, I also learned to appreciate how New York City has adjusted to changes in culture and lifestyle and realize that we too must learn to make adjustments and changes if we are to continue growing as citizens and as witnesses for Jesus Christ.

But the biggest lesson? No matter where we live, we have an opportunity to extend hospitality and make our faith more visible to others. When we extend hospitality, our love makes others feel good and what better way to demonstrate the way of the Master, the way we have been taught, what we Christians are famous for.

Next: Paying our respects at “Ground Zero.”