With adoring fans screaming, the players ran to the middle of the basketball court, as their names were shouted over the loudspeaker: “Number 12, Brittany, No 5 Mark, No 2 Anthony, No 11 Elizabeth, No 1 Andrew.” Normal sounds for a basketball game except these players were 5 and 6 years old. The setting is the gym at Fredericksburg UMC and the games are part of Upward Basketball. From Five years old up to Sixth grade this process was repeated for every game every Saturday for two months for 180 children. 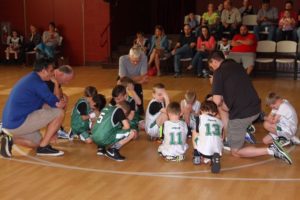 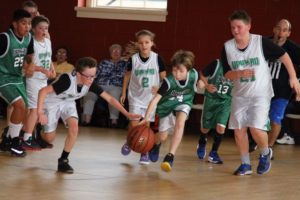 “Established in 1995, Upward Sports develops total athletes mentally, athletically, spiritually, and socially – producing players who excel both on and off the field. Today, approximately half a million players at more than 2,000 churches participate in camps, clinics, and leagues. Their Mission: Promoting the Discovery of Jesus Through Sports. Their Values: The Expectation of God Moments. We believe that God is at work all around us.” (Upward Website) Four basic life principles are stressed:

1. The Life of Integrity – We believe that how we live is more important than what we say. “I have been crucified with Christ and I no longer live, but Christ lives in me. The life I live in the body, I live by faith in the Son of God, who loved me and gave himself for me.” – Galatians 2:20

My name is Nicholas Futrell and I am in the sixth grade. Yesterday, I played my last game of Upward basketball. I started playing when in the third grade. I’ve improved each year and learned something new each season. There are a lot of things about basketball that are the same with life. I would like to share with you, some of what I have learned.

There is no “I” in team. You might have heard that before. It’s especially true in basketball. There are four other players on the court and everyone must work together. I learned about First Peter, “God’s gifts of grace come in many forms. Each of you has received a gift in order to serve others.” (4:10) Being a team player and finding ways to help each other helps us not only in basketball, but in life.

It feels great to win games. But you can’t win every game. Coach told us it was more important for us to have fun playing together and to learn how to play. We talked about “Hope,” believing that something good can come out of something bad. In John it says, “In this world, you will have trouble. But be encouraged! I have won the battle over the world.” (16:33) Yes, I played my last game of Upward basketball but I’m just getting warmed up in my life and I’m taking God with me!

2. The Opportunity to Serve – We believe that it is a privilege to serve others. “For even the Son of Man did not come to be served, but to serve, and to give his life as a ransom for many.” – Mark 10:45

Mark Earnesty was part of a group at our church to start Upward Basketball. “In the fall of 2011, I mentioned that my children were participating in a local Upward Basketball league. Our Pastor said, “why don’t we do that here?” Our first season we had 60 kids participate and it has grown steadily since to 180 children. But getting more kids is not the reason I serve. Upward Basketball combines the love of sport along with my desire to promote the discovery of Jesus. As their mission states, “Promoting the Discovery of Jesus Through Sports.”

But the “sneaky” part of Upward basketball is that it’s not just about kindergarten through 6th graders playing basketball and teaching them about Jesus. It’s also about:
• allowing parents who don’t feel comfortable in church having a safe place to hear the Gospel.
• giving people an opportunity to share their testimony or coach a basketball team.
• allowing our youth to explore their faith by telling their faith story at halftime
• families spending time together coaching, refereeing or sharing a devotion
• youth selling concessions earning money for summer mission programs

Upward Basketball is about an old guy like me having the time of my life coaching a kindergarten team – laughing, smiling and having a little girl tell me that she’s going to miss having me coach her.

3. The Discipline of Excellence – We believe in exceeding expectations. “And whatever you do, whether in word or deed; do it all in the name of the Lord Jesus, giving thanks to God the Father through him.” – Col 3:17

Adam Sutton was our director this year: When I heard about Upward Basketball, I signed up our two children. Seeing the smiles on their faces and the friends they made meant much more to me than the score. Upwards has been a lot of work but a great motivation for me. Upwards Basketball is:
• a child opening their uniform box and putting it on with a huge smile.
• a kindergartener making their first basket and dancing up and down the court for 5 minutes.
• seeing an older child with few basketball skills score their first basket.
• seeing two opposing players collide and then help each other up.
• seeing players learn the beatitudes as they participate in devotions.
• seeing Upward families come later to our church for the first time.

I also coached a team of seven 1st and 2nd graders. I asked what they wanted to learn. They wanted to learn basketball and have fun. We did both and learned about God too. It didn’t matter if they won or lost the game. What mattered was every player had a chance to play and shoot and have fun. I think the Upward Sports program is one of the best I’ve ever been a part of. From players, coaches, referees and parents coming together with sports and learning about God. I can’t wait until next season!

4. The Priority of Children – We believe that every child is a winner. “In the same way your Father in heaven is not willing that any of these little ones should be lost.” – Matthew 18:14

I am Sam Snead and I have been going to Fredericksburg UMC since I was a baby. When basketball started, I decided to join. They would share devotions, bring in guest speakers, and tell us what it truly means to be a friend. My favorite part was being given stars and how they showed you what you did best in each game, I tried to get all of the stars. We had the best coaches who were nice and accepted every kid no matter what. And finally, I made lots of new friends.

Every Saturday for two months, hundreds of children and parents crowded into the Fredericksburg UMC gym to play basketball and hear testimonies from children, youth and adults. Families who never went to church before Upward Basketball asked questions about God within a church setting. Upward Basketball helped us become a better servant and witness to our community. I can’t wait until next year.