In the midst of a crisis of violence, ABC News invited three people from our church to attend a National Town Hall meeting where President Obama was asked questions by people from around the country. We didn’t get a chance to ask our questions but came away knowing we were meant to be there.

The 15-year-old son of Alton Sterling, killed outside a convenience store in Baton Rouge, La and Diamond Reynolds, who live-streamed the death of Philando Castile, her fiancé, on the internet asked President Obama, “How can you keep our families safe?”

The mother of a Baltimore police officer who was pelted with bricks and water bottles last summer in the riots there asked: “What’s my son supposed to do to protect himself? It just seemed like nobody was there to protect him.”

Obama told her to be proud of her son and insisted that Americans needed to do more for impoverished and forgotten inner-city communities. “One of the challenges we have is some of these communities have tensions that have built up for so long,” he said. “That’s why we have to do everything we can to create healthy communities. That will make life easier for your son.”

The last person to address Obama was a woman who had been protesting in Dallas with her son when the killer opened fire, hitting her in the leg. She told Obama, through tears, that one of the officers had jumped on her and her son to shield them from the bullets.

One frustrated woman stomped out of the studio during the taping and began yelling and screaming in the lobby that she wasn’t allowed to speak. A newspaper later reported that she was Erica Garner, daughter of Eric Garner in New York who died in a chokehold incident. Erica wanted an opportunity to express her frustration. When the President heard, he went over to her after the meeting.

She wasn’t the only frustrated one there. Many of us who came with questions also left disappointed. Yet, despite the frustration of not being heard, there were valuable lessons to be learned.

1. The ABC News team did their job well by presenting both sides of the crisis of racism, violence and the misunderstandings between police and the poorer communities they serve.
2. President Obama listened carefully and respectfully offering thoughtful answers that showed he clearly understood the problem and tried to offer more than “politics as usual” type answers.
3. There was a lot of talking, some posturing and many deeply touching stories but there was little or no feedback leading towards discussing actual solutions.
4. However, I met several people who were invited because they organized responses in their communities that were making a real difference in healing tensions.
5. The police officers were there because they successfully eased tensions in their communities through better training of their officers and improved communication with communities served.
6. Ultimately, the solution to easing problems of racism and increased tensions in our poorer communities was not a policing issue or an African American problem. Everyone would have to become more involved from educators, to political leaders, churches and business leaders.
7. On a local level, it will take all of us working together having honest conversations about violence and hatred and racism that are impacting our communities throughout the country. 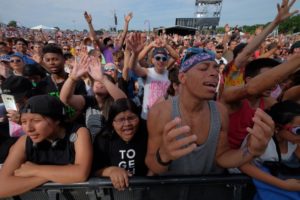 Recently, the Washington Post reported: “Rappers and pastors, poets and authors appealed one Saturday to thousands gathered around the Washington Monument in to recommit to prayer and hope at a time of intense racial and political polarization and growing secularism. People streamed into prayer tents, asking volunteers for prayers to “reset” their lives, their families, their country. They got on their knees by the thousands, appealing to God to “break racism.”

Paul gives this challenge to all of us in Ephesians: “Always be humble and gentle. Be patient with each other, making allowance for each other’s faults because of your love. Make every effort to keep yourselves united in the Spirit, binding yourselves together with peace.” (4:2-3)

What if all of our local communities could find ways to be humble and gentle with each other? What if we could learn to be more patient, making allowance for each other’s faults because of our love? Our communities would be more united as we bind ourselves together with peace being our ultimate goal.

In hundreds of communities, police officers are attending community gatherings and church services in order to listen to each other and develop better ways of communication. Facebook is now full of pictures showing churches and communities literally surrounding their officers and leaders in prayer.

In other words, we are all part of the problem of racism, hatred and violence and we are all called by God to be involved in the solution. How is God leading you?

One friend on Facebook responded: “Wow, that was quite an honor to be invited. I watched the Town Hall meeting this evening. Even though you didn’t have the chance to ask questions, you did have the opportunity to see and listen. No doubt, you attended with an open heart & open mind — showing empathy and a willingness to listen to the views of others. I believe that must be the first step towards making POSITIVE changes together as a nation!”