Drayton, wrote about tense moments he experienced while waiting for his wife’s surgery. “It was ten o’clock at night and Robin was outside looking at the stars! I thought it was settled and done. Robin’s surgery was a few short days away and although the doctors assured her this was a routine procedure; she was still looking as if they were going to amputate something!”

“As her husband, I assumed my duty was to hide concern while showing a strong front. Like most men, I substituted statistics and reason for assurance and thought it was enough. Now she was worrying again. I walked toward her ready to offer more of my male logic.”

That’s when the miracle happened.

“Everything I planned to say vanished. Unknown words came from my lips, as I silently wrapped my arms around her waist and kissed her cheek. ‘God loves you. Everything will be all right. You will see a sign from God that you will be ok.’”

“In an instant the most spectacular shooting star we ever saw blazed across the sky from horizon to horizon. A surprised and delighted, ‘Ooh!’ came from Robin! For a long moment neither of us spoke. What could we say?”

“Moments before, I was an insensitive, scolding husband walking towards a fearful, anxious wife. Somehow, God miraculously intervened and changed us both into vessels of His gracious love.”

Usually, our influence as Christians is steady and consistent. People know and remember us by our day-to-day actions among our family and friends: We could be a family member continuously offering love and acceptance or a boss supplying encouragement when needed most or we could be the friend who telephones when others are at a low point.

But, occasionally, there are life-changing moments when God’s extraordinary light suddenly shines into our darkest need and the only word that adequately describes what happens next is — miracle.

Drayton and Robin witnessed a miracle. Here is another:

What started, as a normal day at a local high school became a tragedy for a young sixteen-year-old boy full of enthusiasm and friendly mischief. During tennis practice he suddenly dropped to the ground clutching his chest. Within minutes this vivacious young man was gone.

People appeared from all over the county. School officials opened up the high school auditorium and encouraged the students to gather. A minister’s wife called out to pastors. The students gathered in small groups sharing condolences, memories and tears.

But just as we started to leave, Russell, a father of one of the students stood and said: “Before we go, I think we should pray. Let’s form a circle and hold hands. I’ll start and the rest of you join me.” This was out of character for Russell, but miracles often come from unexpected sources.

Hundreds of crying parents, students, pastors, and school officials formed a giant circle, bowed their heads and earnestly began to pray. Person after person, expressed their anguish to God and begged God to provide comfort to the family and friends. For a few moments, we could all feel the Holy Spirit of God in our circle of mourners:

Russell became a true witness for God amidst our suffering and grief. As followers of God, we are occasionally given the opportunity to be a ray of hope in the midst of darkness.

Drayton went on to write: “Being an instrument of God’s will, at times may not be voluntary or even expected. I always believed God would use me as a prophet only if I asked and was spiritually clean. Sometimes, this is undeniably true but not in my case. God abruptly interrupted my mission and lovingly substituted His own. I wanted to comfort Robin with common sense and almost interrupted a miraculous moment of faith. No matter the reason for why it happens, when God, uses you for whatever purpose, you will feel blessed because of it.”

“Thinking of the wonderful moment Robin and I shared with God is very emotional for me. Several times in telling our shooting star story Robin would need to finish because I became too ‘choked up’ so once more I will let her finish.”

Robin smiled and then said: “After we stood there a few moments just soaking in what happened. I turned to Drayton and whispered, ‘Do it again!’” 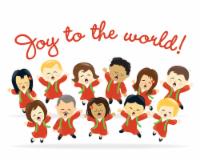 At this point, choir members were arguing, the congregation was mumbling and I was bewildered. "What's wrong with our choir?" I wondered. Actually, the problem was not with the choir but with me.

The sign said: “Prayer Tree” and invited us to write our prayer requests for Christmas and hang the ornaments on the tree. Hundreds of people responded. What follows are a few of those prayers:

A Bag of Mulch

I thought to myself: “Why is he saying this to me? Should I respond? Should I tell this young man he’s making a mistake? Should I tell him there is another way to enjoy life? Should I talk about God in a crowded department store to a stranger? I really don’t want to be a witness right now Lord. I just want to make my purchase and go home. Is there anything wrong with that?”