Storms and Fishing: Lessons from Blacky

Published by larrydavies on January 20, 2016

When I was a child, our family frequently made the journey from Virginia to a small community near Panama City, Florida to visit our grandparents. Blacky, my grandfather owned a fishing house on West Bay and most mornings would either escort fishermen or go shrimping for bait sold in his store. Around noon Blacky would often return with a happy, joyous fishing party and a boat full of fish. The younger children, including me were usually stuck hanging around waiting for the adults to come home.

Usually, but for me, things were looking up. Blacky asked me to accompany him in the morning to go shrimping for bait. No one else: just me. I was thrilled and couldn’t help bragging to all the other children. My older cousin, however, didn’t seem envious at all. In fact, he thought it was funny, gave me a knowing look and warned me this trip would not be the thrill ride I was anticipating. 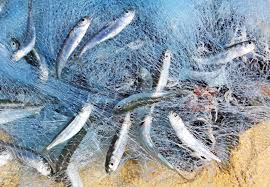 That night, I carefully prearranged my clothes to be ready when Blacky came. I could hardly sleep, imagining the excitement of being in the same boat with the greatest fisherman of all time. What life changing lessons would I learn? I passed the long night hours picturing the mountainous piles of shrimp and fish we would haul in. I practiced my best modest smile while acknowledging the envious looks from the other kids on shore wishing they were on that boat instead of me.

Just before dawn, Blacky shook me awake and gently asked: “Are you ready for an adventure?”

“You bet, Grandpa!” I replied, leaping out of bed and quickly putting on my clothes. All thoughts of my cousin’s warning were quickly forgotten in the excitement of finally going fishing with Blacky.

Within a few minutes we were in the boat heading through the waters of the inlet guided by the slowly rising sun toward West Bay. Blacky pointed out how the buoys floating in the water were really channel markers to guide boats and ships through the deepest and safest part of the bay. “Stay close to those buoys,” he shouted over the noise of the outboard motor, “and they will guide you home.”

After a while, he maneuvered away from the buoys to a spot Blacky instinctively knew was the right place between deep water and shore. Quickly he gathered nets scattered throughout the boat and showed me how to throw them so attached weights would guide the nets to the bottom where the shrimp lived. Then, I guided the boat as he instructed to slowly steer in an ever widening circle.

After the boat made three or four slow, lazy circles, Blacky motioned to stop. Watchfully, we began pulling in the now heavy net and neatly arranging it on the deck. At first we saw nothing but seaweed and an occasional crab but it wasn’t long before we began seeing shrimp; lots and lots of shrimp. The work was hard but seeing all those shrimp and working beside my grandpa made it all worthwhile.

We moved the boat to another spot, threw the nets out and once again I guided the boat in ever widening circles. “You’re doing great!” grandpa said, while taking a seat closer to the bow of the boat.

Blacky then promptly fell asleep; not just a polite snooze mind you but a deep sleep filled with snorts and wheezes that would wake the dead. Try as I might there was no waking my grandpa. Now what? I was in deep water as well as deep trouble and help seemed many miles away. Now, I was beginning to understand my cousin’s warning: “So, you’re the new victim” he said. “You’ll be sorry!”

A similar situation happened to the disciples as they traveled with Jesus: “One day Jesus said to his disciples, ‘Let’s cross over to the other side of the lake.’ So they got into a boat and started out. On the way across, Jesus lay down for a nap, and while he was sleeping the wind began to rise. A fierce storm threatened to swamp their boat and they were in real danger.” (Luke 8:22-23)

The disciples were expecting a joy ride but instead they were greeted by a fierce storm. Their guide and protector, Jesus was asleep. For experienced fishermen to be terrified, the storm must have been of hurricane proportions with high waves threatening to swamp the boat at any moment. They were obviously afraid and in grave danger and desperately needed help.

Next week: “Lessons on Life and Faith.”