Published by larrydavies on July 1, 2016

This first week in July where we celebrate the birth of our nation is an interesting time for me to begin as pastor of Fredericksburg United Methodist Church. 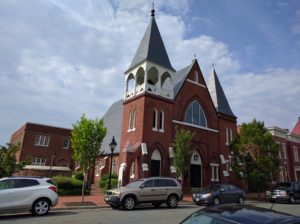 Fredericksburg UMC has existed almost as long as America itself. In the introduction to, Fredericksburg United Methodist Church, describes FUMC as a church in the midst of what is known as ‘America’s most historic city,’ – a city associated intimately with the boyhood and family life of George Washington, the home of Fielding Lewis and James Monroe and a community associated with John Paul Jones; a city who heard the tramping feet of the soldiers of the War Between the States and witnessed its bloodshed and battle; a city which felt the impact of nearby military establishments in World War II.”

Today, Fredericksburg is considered a bedroom community for people working in greater Washington DC to the north and Richmond to the south. There are several popular shopping areas including Central Park advertised as one of the largest malls on the East Coast. When I asked for suggestions of places to visit, friends who knew Fredericksburg immediately named Carl’s Ice Cream Stand as the best in Virginia. Yummy! However, the heart of Fredericksburg is found in the rich preservation of American culture and history from the still-standing Colonial buildings to the civil war battlefield and cemetery to the old-time shops and restaurants in the heart of the city.

The Methodist Church had a rough start in Fredericksburg. George Whitefield, a famous preacher during the 1760’s was treated so rudely, he pulled off his shoes and shook the dust from them never to return. Francis Asbury visited once but no one invited him to preach and never returned. Later, he wrote that he rode through AWFUL Fredericksburg to another place where they were kindly treated.

There were many preachers at Fredericksburg UMC in the early years but the one who receives credit for establishing the church is John Kobler. Under his leadership Fredericksburg Methodist Church became one of the leading churches in Virginia. Rev. Kobler had influence far beyond one church, as he worked with and trained many pastors throughout Virginia and beyond. He drew up guidelines for preachers that could still apply today.

1. All in good health, arise at daylight.
2. Before making any calls, spend an hour with the Bible and in prayer.
3. Preach and meet the class.
4. Between the a.m. service and evening spend 1 ½ hours in most useful improvement.
5. Times just before family prayers be spent in reading, singing and Godly conversation.
6. Visit the sick whenever possible whether they call or not.

Rev. Kobler’s diary describes “many in his audience who ‘after laying prostrate and weeping silently, suddenly began to praise God loudly’ or who were ‘wetted down in tears.’ He himself describes tears flowing from his eyes while preaching.” Rev. Kobler’s was buried beneath the pulpit of the church he founded where his body rests today. Years later, his wife, Mary was buried beside him.

Today, Fredericksburg UMC is a large, robust congregation located in the heart of the city. There are four worship services each weekend, numerous missions and ministries including one of the largest and most active food banks in the area. Years ago, members of the church made a courageous decision to stay in the city and continue their role as a spiritual and religious influence in the Fredericksburg community. The church added a full sized gym and other community related facilities which are often used 12 to 14 hours every day, seven days a week.

Hebrews 10: 22-25 seems to describe the past, present and future of Fredericksburg UMC: “So let’s do it – full of belief, confident that we’re presentable inside and out. Let’s keep a firm grip on the promises that keep us going. He always keeps his word. Let’s see how inventive we can be in encouraging love and helping out, not avoiding worshiping together as some do but spurring each other on, especially as we see the big Day approaching.”

Fredericksburg UMC has a promising future if we can remember the lessons of the past, learn from present successes as well as failures and continue to follow God and the guidance of Holy Scripture.

• So let’s do it – full of belief, confident that we’re presentable inside and out.
• Let’s keep a firm grip on the promises that keep us going. He always keeps his word.
• Let’s see how inventive we can be in encouraging and helping out…
• …not avoiding worshiping together as some do but spurring each other on…

I know Fredericksburg UMC will love and work with you as did Lynchburg. God bless, Dot Payne (Mineral UMC)

Thank you. FUMC has already been so welcoming. We are falling in love with the church and the people very quickly.

We look forward to having you guide us in “giving thanks to the Lord, making known His deeds…”
Let us know what we can do to help.

Thank you. Everyone has been so welcoming already. We feel blessed to be here.