Published by larrydavies on January 1, 2016

Dave Berry, wrote in his annual “Year in Review” column: “We apologize but 2015 had so many negatives that we’re having trouble seeing the positives. It’s like we’re on the Titanic and it’s tilting at an 85-degree angle with its propellers way up in the air, and we’re dangling over the cold Atlantic trying to tell ourselves: ‘At least there’s no waiting in line for the shuffleboard courts!'” 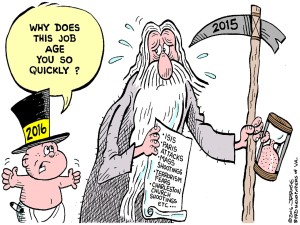 Was 2015 that bad? Terrorism and violence dominated the news but there were other events and changes taking place not so readily noticed. An article in the Washington Post, illustrates astounding ways 2015 made history. Here are 9 of them:

1. The majority of America is no longer middle class.
2. Gun deaths became as common as traffic deaths.
3. Global poverty fell to its lowest point ever.
4. More Mexican immigrants are now leaving the US than arriving.
5. A million migrants entered Europe.
6. Africa went a year without naturally occurring polio.
7. China scrapped its one-child policy.
8. Millennials surpassed boomers as the biggest U.S. generation
9. Same sex marriage became a right in the US

In other words, there are more rich but also more poor and more division. Our cars are safer but our world is more violent. Worldwide terrorism led to increased immigration to Europe. Yet in the midst of all this bad news, poverty around the world has lessened. Fewer immigrants are coming to America from Mexico. In Africa, Ebola was defeated and polio was greatly reduced. China eased a controversial restriction against families having more than one child. Why aren’t those stories in the news? Also: Millennials replaced boomers and same sex marriage became legal. Whatever your views, there are huge changes impacting our society and culture.

Locally, we could add two very different stories: The tragic shooting that took the lives of Alison Parker and Adam Ward and wounded Vicki Gardner and Sweet Briar college first closing, then miraculously reopening. One story dramatically brought the impact of increased violence to our community while the other exemplifies the resilience of former students taking a stand for a noble cause.

The lessons of 2015 illustrate how much we need God offering guidance, giving strength and providing comfort in the midst of our struggles and controversies. So what can we do to correct all of the difficulties and problems facing us?

“Do not let fixing things be your top priority. You are limited in your capacity to correct all that is wrong in the world around you. Don’t weigh yourself down with responsibilities that are not your own. Instead make your relationship with me your primary concern. Talk with Me about whatever is on your mind, seeking My perspective on the situation. Rather than trying to fix everything that comes to your attention, ask Me to show you what is truly important. Remember that you are on route to heaven and let your problems fade in the Light of eternity.” — Jesus Calling

God’s promise in the midst of difficult times: “I will instruct you and teach you in the way you should go; I will counsel you and watch over you.” – Psalm 32:8

Dave Berry described 2015 like being on board the Titanic, yet in the midst of the worst of 2015, God was still at work offering opportunities for us to be the church providing comfort and hope. Those same opportunities await our churches in 2016 if we are willing to trust God, take steps of faith and dare to be a Christian witness for God. The alternative is to sit back and watch while doing nothing.

There was a very cautious man
Who never laughed or played
He never risked or tried,
He never sang or prayed.
And when he one day passed away,
His insurance was denied,
For since he never really lived,
They claimed he never really died.
– Anonymous

2015 was difficult and 2016 may not be much better but in the midst of the difficulties God offers opportunities to display what can be right with our world when God is at the center of our lives. I pray we will have the courage to be a witness, a voice and a testimony to the Good News of Jesus Christ.