Published by larrydavies on October 11, 2017

God challenged a church I served in 2004 to think bigger and miracles followed. In December, a Tsunami devastated parts of Asia. We raised money and accepted several projects including sponsoring a ship full of rice to Sri Lanka. Then I was asked: “Would you go with us to Sri Lanka? You could see the rice delivered, assess the damaged area and look for other opportunities to help.”

Can we say ‘yes’ with faith to God’s invitation knowing that serving our Lord is more important than our occupation, our family and even our very lives? Yes, we can. We say yes trusting God for answers, resources and courage to enable us to do far more than we ever imagined. I fearfully said ‘yes’ obtained a passport and was soon on a flight with three other leaders to the other side of the world.

We landed in the capital city of Colombo, Sri Lanka, away from the tsunami zone. A few miles away, a train jammed with hundreds of passengers was destroyed as waves curved around the island. Someone or several people in a state of panic pulled the emergency stop cord. The train was moving away but instead, stopped and received the full blow of the oncoming wave. Hundreds drowned. 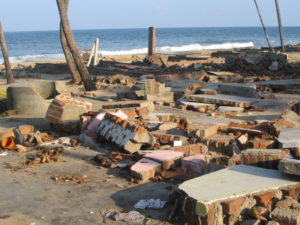 We flew to the tsunami-ravaged beaches of a fishing village: Kalmunai. The news reports could not prepare us for the devastation. Demolished fishing boats littered the beach. Piles of brick and rubble, scattered among palm trees, represented houses and businesses. The destruction stretched for miles along the beach and at least a mile inland. Clusters of white flags marked mass graves.

Despite the overwhelming tragedy, young children were quick to greet us and appeared remarkably exuberant as they scrambled to pose for pictures. There were giggles and laughter as we distributed kits filled with household necessities, school supplies, games and frisbees. But, when we mentioned tsunami, their faces became somber. One girl spoke of losing her family, mom, dad, three brothers and a sister. 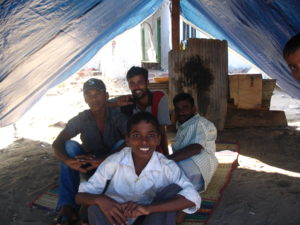 A woman approached me with a plastic bag clutched in her hands. She reached inside and handed me a type-written piece of paper describing how she lost all seven of her children. Then she handed us a white card containing the name, age and description of each child. Through an interpreter, she said to us, “Please pray for my family. I have lost them all.”

At one point, we were surrounded by an angry crowd. Through an interpreter we heard, “You come to our town with your cameras, take pictures and make promises. Then you go home and give us no help. Because we are Muslim and you are Christian, we get nothing.”

“Suppose you see someone who needs food or clothing and you say, ‘Well, good-bye and God bless you; stay warm and eat well’ — but then you don’t give that person any food or clothing. What good does that do?” (James 2:15-16)

We promised Kalmunai we would not abandon them. Amidst the rubble, I picked up a cluster of fishing net and showed it to several men as they described their desire to go back to work. “We must fish to survive!” they emphasized. We learned that for $3,000, a new fishing boat equipped with a motor and nets could be built locally. With each boat, four families could work.

Within days of our return, people throughout our area responded. Churches, clubs, families and businesses adopted the fishing boat as a project. By the end of the campaign, our community purchased thirty-thee boats. More importantly, a sense of hope was restored as one community aided another.

In a country that is primarily Hindu and Muslim, the Christian church made a difference and became a significant source of aid and relief. Although it was outside our comfort zone, we accepted God’s challenge and received an opportunity for ministry.

God continually sends invitations to be the church during challenging times. Our faithful response should be to say ‘yes’ to the invitation knowing that serving God is more important than our occupation, our family or even our very lives. We say yes trusting God for answers, resources and courage to enable us to do far more than we ever imagined possible.