Korea: “This Is My Story”

Published by larrydavies on November 1, 2015

Blessed assurance, Jesus is mine! Oh what a foretaste of glory divine!
Heir of salvation, purchase of God, born of his Spirit, washed in his blood.

“Blessed Assurance” by Fanny Crosby is beloved in Korea. Our group of 34 American pastors sang the hymn in Korean as our way of saying “Thank you!” for the radical hospitality shown to us by our generous hosts at Bupyeong Methodist Church. We were showered with kindness from the beginning as we were greeted at the airport with enthusiastic applause and a red rose. We ate extraordinary meals, including a ten course gourmet feast, stayed in hotel-like accommodations, watched a special concert from gifted musicians and received numerous acts of hospitality, all for our benefit.

Why were we treated so generously? 1. Because our Bishop Cho is greatly honored and respected in South Korea. 2. Because we are Americans and have a unique relationship with Korea. Two stops on our tour illustrate why.

First was a trip to Yanghwajin Foreign Missionary Cemetery. 145 graves belong to foreign missionaries and their families who dedicated their lives to God through service in Korea. Many gave up promising careers to live in a land unknown to westerners at the time. Although, Korean history begins over 4000 years ago, protestant Christians didn’t arrive until 1885. Korea was a hostile place for Christians. Missionaries could not start a church or even preach in public. Penalties were severe.

Yet, despite the difficulties, H.G. Appenzeller, one of the first missionaries, established Paichai School and Chungdung Methodist Church. M. Widdowson started an orphanage near Seoul and organized the Korean Salvation Army. A.G. Welborn founded the YMCA. J.P Campbell opened the Baewha School for girls. R.S. Hall, a medical missionary, cared for visually handicapped and developed a braille suitable for the Korean language. J.S. Gale translated “Pilgrim’s Progress” into Korean, the second most-read book by Koreans next to the Bible. H.G. Underwood is considered the pioneer of the Korean mission, establishing the first Presbyterian church in Korea. 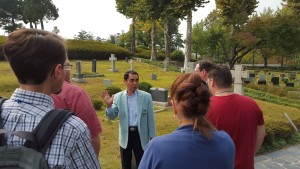 “The missionaries profoundly influenced Korean society, not only by establishing hospitals and schools but by affecting its intangible values, thus contributing to the abolition of the class hierarchy in old Korea. Some of those who came to Korea to spread the Gospel did not hesitate to share in the many sufferings and hardships brought about by Japan’s occupation of Korea. Many willingly exposed themselves to much danger in fighting for Korea’s independence.” Yanghwajin Cemetery Brochure

Perfect submission, perfect delight, visions of rapture now burst on my sight;
Angels descending bring from above echoes of mercy, whispers of love.

The second visit was to Odusan Unification Observatory on the DMZ, the dividing line between North and South. Korea has been occupied and brutalized by several countries but the occupation by Japan from 1909 to 1945 was a particularly bad time. There were years of resistance and rebellion that did not end until Japan’s surrender in 1945. But, instead of receiving freedom, Korea was divided by the Allies into North and South. This dividing line and the controversy surrounding the splitting of the country led to the Korean war. The United States played a pivotal role. Over 128,000 Americans were either killed or wounded. Thousands more Americans continue guarding the border, the DMZ.

The Odusan Unification Observatory provided information, exhibitions and pictures of the Korean war and the aftermath. Between the observatory and North Korea is a short stretch of water. As you look through provided binoculars you can’t help but notice the stark difference between the two countries. Across the water, there are no high rise apartment buildings or traffic jams; just an eerie quietness. You see several farm houses and occasionally one or two people strolling about.

After many years of poverty and stagnation the South Korean government changed from democratic to military dictatorship back to civilian rule but in the midst of the governmental turmoil, South Korea began to emerge as an economic power. Relations with North Korea are described as fluid or more accurately, full of ups and downs. This tension which at any moment could erupt into war is key to understanding the role of faith and prayer in the lives of many South Koreans.

“Today, Seoul looks and feels much like any other sophisticated city. Korean businessmen would not be out of place in Tokyo, London or New York. Seoul’s subway system would put many other capitals to shame and Korean excellence in technology has ensured that Samsung, Hyundai and Kia have become recognized worldwide. Scratch the surface, however and things are still very different. Old ways of thinking and behavior remain remarkably strong in the mind of the Korean people, almost regardless of their education and rank.” — Insight Guide to South Korea

Rev. Hong Eun-Pa, pastor of our host church, Bupyeong Methodist says, “We will always be grateful for the sacrifices made by American missionaries and later, American soldiers. We would not be the country we are today without the support of the United States.”

Next Week: Understanding and learning from the Korean Church.