Published by larrydavies on November 7, 2015

Jesus said: “Now I say to you that you are Peter (which means ‘rock’), and upon this rock I will build my church, and all the powers of hell will not conquer it. And I will give you the keys of the Kingdom of Heaven.” – Matthew 16:18

What surprised me when our group of 34 pastors from Virginia visited churches in South Korea was not the differences. What surprised me were the striking similarities. Except for language, the hymns were familiar, worship services were similar, even the buildings, sanctuary, classrooms and kitchens could easily blend within any small town or large city in America. There were greeters, ushers, children and youth programs and church choirs dressed in beautiful robes.

An expert on the Korean church shared recent statistics showing religious preferences nationwide were: 26% Protestant, 23% Buddhist, 8% Catholic, 14% Others and 29% Without Religion. Recent years shows large increases in “Without Religion.” So, Korean and American churches struggle to stay relevant in a culture increasingly drifting away from Christianity and claiming no religion.

Our host church, Bupyeong Methodist Church led by Pastor Rev. Hong Eun-Pa was an excellent example of a large membership church near Seoul. On the Sunday we attended, the full sanctuary held several thousand worshipers for three services. Because travel was time consuming in Seoul, many of the members stayed all day to participate in worship, small groups and service ministries. 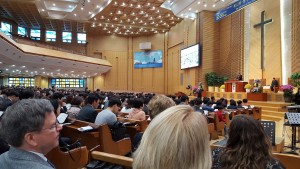 Rev. Hong Eun-Pa cited several reasons for their success: 1. Vital importance of prayer and following the Holy Spirit. The daily 5 AM prayer service was evidence of the work of the Holy Spirit. 2. Develop and organize more lay leadership. We saw this in the efficient and enthusiastic coordination of hundreds of ministries throughout the building from feeding worshipers to children’s programs to hospitality ministries to caring ministries to the many choirs. 3. Emphasis on continuous discipleship. We heard testimonies of lives changed and renewed. 4. A willingness to sacrifice much for the sake of serving God. This sense of sacrifice enables Bupyeong Methodist to support hundreds of churches and ministries throughout Korea and the world.

We also visited four other churches each making a difference in Korea:

• The 100th Anniversary Memorial Church led by Rev. Jae Chul, Lee was formed to preserve the foreign missionary cemetery. This unique congregation combines preserving the past with extensive adult teaching and preparation of new disciples for Christ.
• Songtan Gipeun (Joyful) Church led by Pastor Woong Seok, Son has worked primarily with children and families. There is a large pre-school ministry with one of the better children’s libraries in Korea. A coffee-shop connected to the church provides weekday connections with the surrounding neighborhood and offers a place of fellowship.
• Cheongbuk Grace Church led by Rev. Jun kyu, Lee places special emphasis on sending their members into sponsored ministries throughout the community. There is an excellent music school, a wellness center and dozens of other businesses all managed by the church.
• Good Shepherd Church led by Rev. Ki Seong, Yoo also known as the “Walking with Jesus Church” had many difficulties at first but learned to continually challenge themselves with the mantra: “Jesus Christ is with us.” Emphasis is placed on spiritual journaling both in classes and through internet groups. There are also dozens of specially designed prayer booths similar in size to old telephone booths where hundreds of parishioners gather to pray.

A treasure chest of critical lessons: Importance of prayer and following the Holy Spirit, strong and passionate lay leaders, continual emphasis on discipleship, a willingness to sacrifice, extensive adult teaching and preparation of new disciples, emphasis on teaching children, sponsoring ministries within the community, providing prayer booths and journaling opportunities and always and continually relying on the greatest promise of all: “Jesus Christ is with us.”

The value of what I learned? Priceless!

Jesus said: “Now I say to you that you are Peter (which means ‘rock’), and upon this rock I will build my church, and all the powers of hell will not conquer it. And I will give you the keys of the Kingdom of Heaven.” – Matthew 16:18

In the Bupyeong Methodist Church sanctuary, alongside two large television screens were two banners; one had the church on one side with an airplane in the center flying toward a city filled with landmarks such as the Eiffel Tower and skyscrapers. The message: “Taking the Gospel, around the World.” Another banner displayed John Wesley on horseback saying: “The world is my parish!”

The churches we visited in Korea truly consider the “World as their Parish” and are dedicated about “Taking the Gospel around the World.”