Published by larrydavies on November 14, 2015

“I was a student in college when I first became a Christian but as I started teaching, I stopped attending church. When I got married my husband was away a lot. I was living in a different neighborhood, had a child and I felt so lonely. I decided to go back to church but didn’t know which one? I was impressed by the fervent prayer movement of this church. But at first, surrounded by people at 5 AM praying loud and hard felt a little strange. ‘Am I in the right place?’”

The woman who spoke these words was a member of our host church, Bupyeong Methodist near Seoul, Korea. She was part of a group that met with us to share their stories, their testimonies.

She continued: “I joined a group meeting after the prayer service. One day, I was called on to pray. I didn’t know what to pray about. So, I prayed: ‘When my husband comes back, help us come back to church.’ Soon, my husband asked if he could attend our music festivals without attending prayer services. He became severely injured and was in the hospital for a long time. One day, at early morning prayer, I felt from God that he would be okay. He began to be more serious about his faith during the recovery process. Now my husband has become an elder in this church.” 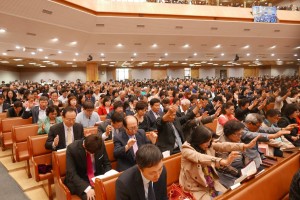 From churches in Korea, I received a treasure chest of critical lessons: The importance of prayer and following the Holy Spirit, training and encouraging strong and passionate lay leaders, a continual emphasis on discipleship, a willingness to sacrifice, extensive adult teaching, emphasis on teaching children, sponsoring ministries within the community and always and continually relying on the greatest promise of all: “Jesus Christ is with us.”

The value of what I learned? Priceless! However, what made our Korea experience memorable was seeing and experiencing the testimonies of people impacted by the churches and ministries visited.

A distinguished looking man had this testimony: “I work at a bank. I might look okay but my hands and my body aches. I drank excessively so that it actually damaged my stomach. When the pain got severe, I would be up all night. My wife, a faithful Christian suggested honey may work so I tried honey. It didn’t work. Later, I discovered what she really meant by “honey” was reading the word of God. I decided to read the entire Bible in 40 days. It was not easy. When the pain was severe, I woke up in the middle of the night. So reading the Bible was part of my therapy. I realized when I read the Bible a lot, I felt better. I went to the morning prayer service and felt God calling me more to a life of prayer and reading the Bible. When my children were in middle school, I woke them up and took them with me to prayer service. My son went to seminary and now serves as a pastor. I’ve been attending early morning prayer service for over 30 years. Ezekiel chapter 3 mentions eight scrolls, one tastes sweet as honey. This year I have read entire Bible 11 times so far. It still tastes as sweet as honey.”

The Bible describes the early church: “They worshiped together at the Temple each day, met in homes for the Lord’s Supper, and shared their meals with great joy and generosity—all the while praising God and enjoying the goodwill of all the people. And each day the Lord added to their fellowship those who were being saved.” – Acts 2:46-47 In the midst of their enthusiasm for being a part of God’s church, people were obviously going out and telling their stories. Testimonies are a sure sign that God is actively working in the church and community, changing lives and transforming the world around us.

Another woman said: “I graduated from college and became a teacher. At the school where I worked, a person from this church became a wonderful friend. During break time instead of talking to me she was reading the Bible. I didn’t know God at that time but as I got to know her, I came to know God. I became a principal when she became a principal and we became gray elders together. I learned from her about the early morning prayer service. My family prevented me from going to church but they could not control my mornings so I began attending early morning prayer service. I prayed for my kids that the Lord would bless them. I went through a lot of suffering. When I came to the early morning service, God answered my prayers and sent me help. Now I pray: ‘Tell me what you want me to do!’ And God always responds with ‘Daughter I love you!’ I felt God holding my hand. As Principal I face many trials and challenges so I come to the service asking for God’s wisdom and guidance.”

I learned many lessons in Korea but the most valuable one of all was found in the testimonies of these lives transformed by God through prayer. Collectively, all of the people telling their stories agreed that it’s not easy to pray long and hard. But the prayer community of their church energizes them and encourages them to continue praying. The fervor and the pastors message at each prayer service helps them face their daily tests. “And each day the Lord added to their fellowship those who were being saved.” Praise God!