A man was standing at a busy intersection wearing a sign: “I cheated. This is my punishment.” When interviewed he said, “I’m wearing the sign as punishment for being unfaithful.” He added: “I thought she was kidding.” After a pause, he hung his head and said: “She wasn’t kidding! In order to make things right, I have to do whatever is necessary.”

“I cheated! This is my punishment!” Wow! This man’s wife was angry, likely for a good reason.

Last week, I showed a youth class where Jesus was angry. Some people always look and act angry so we don’t pay much attention but when a person like Jesus who is known for being loving, calm and compassionate… becomes angry, you notice. Why was Jesus so angry? Also, why was he so angry at seemingly good community leaders? Answer? Because they too cheated: They were unfaithful to their calling before God. Seven times in Matthew 23, Jesus proclaimed: “How terrible it will be for you.”

How did the Pharisees, our religious leaders respond? Jesus was arrested, whipped, beaten and cruelly murdered on a cross. 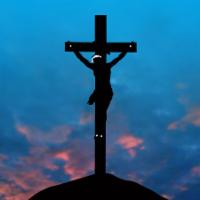 How should we respond? Stand on a street with a sign? “I cheated on God! This is my punishment.”

Is that what Jesus wants us to do?

One email responded: “Pride causes us to do things to make ourselves look good but doesn’t do a thing for those in need.” Another: “Jesus did not come to judge but save. The leaders would have been freely forgiven, cleansed and made right with God. Instead, they clung to their own works as if they were righteous and refused to come to Jesus for forgiveness.”

Jesus cries out: “O Jerusalem, Jerusalem, the city that kills the prophets and stones God’s messengers! How often I have wanted to gather your children together as a hen protects her chicks beneath her wings, but you wouldn’t let me.” (Mat. 23:37)

Refuse to confess and you reject a loving God who longs to forgive and restore you.

Imagine Jesus with tears in his eyes describing a mother hen shielding her chicks beneath her strong wings. God longs to comfort, protect and restore you. The alternative is to refuse to confess, reject God’s love offering and face emptiness and isolation.

Rather than face an angry Jesus, we can be restored and renewed when we have the courage to confess and a sincere desire to change. Sure beats the alternative: Standing on a street corner with a sign proclaiming to all: “I cheated on God. This is my punishment.”

This Easter, join the rest of your fellow sinners in celebration of the One who can restore us. Christ has died. Christ is risen. Christ will come again. Happy Easter.