In the Midst of Harvey and Irma: Remembering David and Ferris

Published by larrydavies on September 14, 2017

Hurricanes Harvey and Irma caused catastrophic damage to areas throughout Texas, Louisiana and Florida as well as the Caribbean Islands. In addition, our church also experienced the loss of two faithful leaders, David Brumbaugh and Ferris Belman who made a difference in our church and our community. As we prayed, raised funds, sent needed supplies for those impacted by the storms, our church also paused and remembered two men who would have been leaders in our efforts to help others. 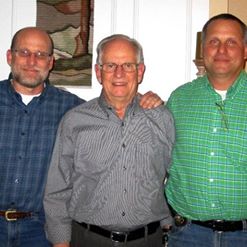 The first time, I worked with David Brumbaugh was at a Committee meeting. David was the chair of a mission-oriented team that contains 25 to 30 of our mission projects. There were 12 to 15 people in attendance, all passionate about their mission and wanting to discuss their issues at great length. So, this meeting, full of good people wanting to share their stories tended to take a long time, a very long time.

David, however, rather than losing his patience or trying to speed everyone up, patiently encouraged each team member as if they had the most important project in the room and that he had all the time in the world to listen to and offer guidance for each and every one of them.

That sums up the good and at times the frustration of working with David Brumbaugh. He had infinite patience and calmness. Listening to him that night, I knew he had a remarkable influence on the others in that room, in our church and ultimately our community and world. One committee member said: “David’s willingness to serve and his quiet, thoughtful, and open-minded approach to our discussions impressed me and gave me much respect for him. Those same qualities gave his leadership the calm, steadiness, and intelligence which allowed our missions to flourish.”

David Brumbaugh had Patience and Passion in abundance. One sons said: “You could always call him for any kind of advice but David was at heart a fix-it kind of guy. They guy you called to get help wiring a three-way switch.” David loved serving God through his local church and through missions whether it be local such as Habitat for Humanity or traveling to various places offering help after a hurricane. 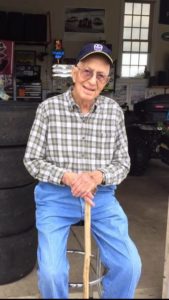 Ferris Belman was a community leader who was a mentor and inspiration to literally thousands of people in our city of Fredericksburg and nearby Stafford County. I heard so many wonderful stories from family and friends of how he inspired them in the midst of difficulties. Because he owned a neighborhood grocery store, Ferris often provided help to anyone finding themselves in financial difficulty.

In addition to serving on the Board of Supervisors for city and county for many years and managing a grocery store, Ferris was also a major organizer and member of the volunteer fire department and rescue squad. After retiring, he even served as a hospital volunteer providing guidance and help.

One friend said: “Ferris was a mentor, friend and role model for me. His smile was infectious and his wisdom unparalleled. Ferris was a man who truly was a public servant and a man of integrity. He will certainly be missed by the community and public he served, we are all indebted to him.”

One son said about Ferris: “My dad was my hero. I admired him to no end, and he is the person I always aspired to be. My heart is heavy, but I know he is in a great place, and will be there waiting to laugh and joke, and even fuss a bit with me when I get there!”

One passage in the Bible, that I would use to describe both men: “Let us think of ways to motivate one another to acts of love and good works.” (Hebrews 10:24) Both David Brumbaugh and Ferris Belman knew how to motivate others to acts of love and good works. They are true examples of what it means to serve as members of God’s church and the world is a better place because of their dedication.

A recent USA Today article written by Paul Singer emphasized the important role, non-profits, especially churches play in disaster relief and recovery: “About 80% of all recovery happens because of non-profits, and the majority of them are faith-based,” said Greg Forrester, CEO of the national VOAD. The money is “all raised by the individuals who go and serve, raised through corporate connections, raised through church connections,” and amounts to billions of dollars worth of disaster recovery assistance, he said.

In addition to the money, it’s the volunteers like David Brumbaugh and Ferris Belman who selflessly give of their time and talents to help others. They make a tremendous difference in the lives of others both in their community and in other areas throughout the world. I give thanks to God for both of them.