Giving and Tithing by Brian Lamb

Published by larrydavies on October 20, 2016

Brian Lamb is a long-time member of Fredericksburg UMC who felt called to ordained ministry and is currently attending seminary and working as a Youth Pastor at a nearby church. Recently Brian shared his thoughts on giving and tithing. His struggles and blessings, match many of our struggles and blessings so I received permission to share his story. 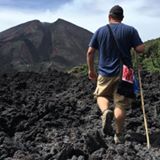 I share this in an effort to show people tangible ways tithing (giving away 10%) has affected my life and can affect your life. In 2015, through prayerful discernment, I decided to tithe. I looked at my weekly income and figured out at the time, I could afford to tithe at 3%, so I did. I started off well and then my typical drop off happened. That’s how it would always happen. I’d get swept up in the fall campaign, commit to a tithe, make good on the first two payments, then forget my check book and it would spiral down hill from there.

In March of 2015 I was attending a church, where they did an entire series on Money. It blew my mind that a pastor would discuss money outside of November and would discuss it for multiple weeks, but it was during one of those services that something clicked. I knew I was supposed to tithe. I realized there are some 20 verses in the bible on tithing. But this time it was met with a tithing challenge. The tithing challenge is a 90-Day Tithing Challenge guaranteeing that if you commit to tithing 10% for 90 days, you will be richly blessed, or your money will be refunded. I left seriously trying to figure out how to tithe 10% for three months. I just couldn’t, but I realized I had stopped tithing my 3%, so I got caught back up on my tithe and began tithing 3% again.

April 2015 was the first time I saw God’s blessing on my tithing. I was using my expendable income for my tithe so when my yard went three weeks without being mowed, I couldn’t pay the neighborhood kid to mow it. I finally found a Thursday evening that I could spend the hour needed to mow the lawn. I pulled into my driveway to find my entire yard mowed. I stood in shock. My neighbor came over and shared that he had mowed the lawn. The Lord placed it on his heart that it was something I needed help with. My neighbor mowed the lawn one other time. The day I found out my Grandmother passed away at the beginning of May 2015 I came home after having run several errands to get ready to drive to Iowa, to find that he had mowed the lawn again. It was one less thing I had to worry about before leaving town for a week.

When I left my job and started back to school full-time I decided I was going to jump my tithe up to 10%. So beginning in September 2015, for the first time in my life, I tithed 10% of my income. It is now October and for the first time I am 100% up to date on my tithe.
This past winter, when expenses were exceeding income, I received a check from my mortgage company stating I had overpaid my escrow account. As a result they were refunding the balance and lowering my mortgage. The check was the amount I needed to get back above water.

This past Monday, I was walking into the library when my glasses broke in half. I no longer have vision insurance and was faced with having to pay out of pocket for an eye appointment and glasses. In the six hours between the glasses breaking and the new ones being tried on, I spent $650. For the first time in a while I had to charge something on my credit card. Several days later, I got a call saying I would receive a $1,000 scholarship to use on whatever I needed.

The blessings go beyond what I shared. As a result of Financial Peace University, I’ve paid off all my credit cards, even after taking a $42,500 a year pay-cut. I’ve been able to travel to Guatemala, purchase a new car, and pay for all my non-tuition related school expenses. Many other things have happened that I know would not have happened if I hadn’t reoriented the way I look at spending my money and the way I look at tithing.

You can receive more of Brian’s blogs and send him encouragement online here: brianclamb.org.