I grew up playing and watching baseball. For my final message before retirement, I attempted to apply what I learned from Scripture and from baseball to recreate a worship service that would be experienced much like a game. Sounds crazy but the lessons are very real. 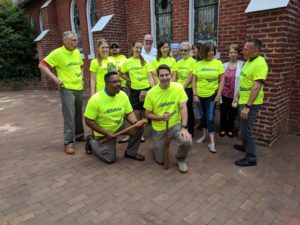 On paper, this game looks doomed before it starts. Our church doesn’t stand a chance… or do we?

In the poem, “Casey at the Bat” by Ernest Thayer. Everyone knows when Casey comes to the plate there will be victory. Confident in his hitting prowess, Casey lets two pitches go and with two strikes Casey takes a definitive swing for triumph: “And now the air is shattered by the force of Casey’s blow.” But as we know, the result was not pleasant: “Oh, somewhere in this favored land the sun is shining bright; The band is playing somewhere, and somewhere hearts are light, and somewhere men are laughing, and somewhere children shout; But there is no joy in Mudville – mighty Casey has struck out.”

In sports, we quickly learn the reality that one team wins but another must lose. Likewise, becoming a follower of God doesn’t insulate you from a life filled with victories and defeats. There are many joys and exciting moments as well as times filled with tragedy and grief. But whether in periods of victory or defeat, we are part of a remarkable team, God’s church. We are promised the final victory of pure joy and bliss but along the way there will be opportunities and challenges.

Speaking of challenges… Sandy Koufax strikes out player after player while Robb the Lobb is under pressure. The Mighty Babe hits a two-run shot over centerfield. Johnny Bench hits a home run and Hank Aaron brings in Willie Mays. The church crew struggles but “Demon” Kirven knocks in “Nasty” Nordstrom and “Cryin” Knott for two and we hang on to keep the score 4 to 3 after five innings.

So, what does the Bible have to say about teams, winning, losing and serving the Lord?

Romans 12 slightly altered using baseball terminology says: “And so, fellow teammates, I plead with you to give your team to God. Let them be willing to make a holy sacrifice—the kind deep in the outfield. When you think of what God has done for you, is this too much to ask? Don’t copy the behavior and customs of the other team, but let God transform you into a new player by changing the way you think. Then you will know what God wants you to do and you will know how good and pleasing and perfect his coaching really is.” (Romans 12:1-2 NRBV – New Revised Baseball Version)

Good baseball teams are full of players who are willing and eager to give their all for the good of the team. These are the players you see slamming into the outfield wall or diving to the ground to make the big catch. Their passion and love for the sport is evident whether they are on the field or off. They live, breathe and eat baseball until at times you’re sick of hearing it but you admire their passion.

As Disciples of Christ we concentrate on winning in a different way. We commit ourselves totally to God without reservation. This “give it all you’ve got” attitude will allow God to transform you into a new person by changing the way you think. You will know God’s purpose and how much God wants to guide your life. Your passion and love for God becomes more evident whether in church or out. You live and breathe your passion for God until at times, others are sick of hearing you, but they admire your passion. This passion for God becomes your witness.

Good baseball players understand their strengths and weaknesses so when playing together as a team they know who plays first base, who bats cleanup and who pitches. Paul is challenging us to honestly know our own gifts and talents so that we know what work we are to do. We are needed and wanted and knowing your gifts allows you to contribute in an exceptional way to God’s team.

In the seventh inning, Sandy Koufax found his arm once again and struck out the side. Cal Ripken is brought home with a single before “Jumpin” Jillian catches a pop-up ending the inning with the bases loaded. The score now: All Stars 5 and the Church Team 3.

Next: More of Larry’s final message about Faith and Baseball.