My final message before retirement, applied what I learned from Scripture and baseball to recreate a game between Major League All Stars against the staff of our church. Sounds crazy but the lessons are very real. But something is not right. Something is missing. A critical ingredient is left out. Yes, we play as members of God’s team. Yes, we understand our God-given gifts. Yes, we run the bases of spiritual maturity as the church becomes a catalyst for growth but something of God is simply not there.

For answers we need to return to the play by play of the game.

In the top of the ninth inning, “Iron Man” Cal Ripken runs home and collides with church team catcher, “Beethoven” Baird injuring “Beethoven’s” hand. He must leave the game and there is no one to substitute. What will our church team do now? “I need help!” cries Lightening” Larry, the manager. Tommy Lasorda, the All Stars manager quickly replies with a sneer, “You’ll have to ask someone from the stands. Maybe one of the spectators will volunteer to play.” Now the game is getting nasty… 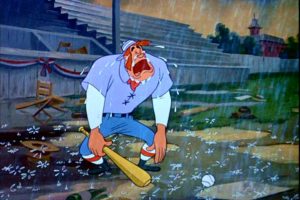 Lesson one: In life as in sports, experiencing the thrill of victory and the agony of defeat are equally important. Becoming a follower of God was never meant to be a never-ending string of joy, laughter and success. Losing, tragedy and grief often represent our journey. Either way, we are meant to be players on God’s team and how we play, win or lose defines who we are.

Speaking of challenges, our church team manager is getting nowhere asking for a volunteer. No, wait a minute. Someone is coming down from the stands. I’ve never seen him before. Who is this guy? The stranger entered the field with a step firm and light; “Give me the mask and mitt,” he said; “let’s finish the fight. His hair was sprinkled here and there with streaks of gray. Around his eyes and on his brow a bunch of wrinkles lay. The stranger picked up the catcher’s mitt and got into position. “Play ball!” shouted the umpire and the game resumed.

Lesson two: Romans teaches that we are all players on God’s team and each of us has different work to do. We belong to each other and we need each other. We especially need God. Good baseball players understand their strengths and weaknesses so when playing together as a team they know who should play where. Paul challenges us to know our gifts and play where we are needed.

Robb the Lobb heaved two strikes, at the mighty Babe Ruth. The stranger caught both and did not seem to heed. On the third pitch, Babe took a ferocious swing and found nothing but air. The side was put out and the score stood 6 to 4. Our church team had one more chance. “Singin” Jennifer went out on strikes and Jumpin’ Jillian was put out at first. But Cryin’ Carol walked and Demon David smashed a double. With players on second and third, up came the stranger. Was this how the game was going to end? Everything was in the hands of a mysterious stranger. Is there a lesson here?

Lesson Three: Using a baseball diamond we learn how our church should be a catalyst for spiritual growth. You learn about the church and make your commitment in the batter’s box then move to first base and you strengthen your relationship with God and the church you move to second where you put your knowledge to use through ministry and move to third base. Home plate is where you practice everything you’ve learned as you become a leader for others.

The strangers’ feet were planted, his face serene, as the pitcher looked his way and grinned before heaving a fastball. The echo of that fearful swat still lingers. High, fast and far the ball flew as it sailed over the high fence. Three runs came in and victory belonged to our church team. The players and fans gathered round to cheer the stranger. “What is your name?” the captain asked. “Tell us your name,” cried all. As down his cheeks great tears of joy were seen to run and fall. For one brief moment the stranger was still, then he smiled and murmured soft and low: “I’m the mighty Casey who struck out many years ago.”

Wow! In the original poem, “Casey at the Bat,” Casey strikes out and Mudville is left to contemplate: “What could have been.” But with God there is always redemption. Clarence McDonald wrote a poem, “Casey, Twenty Years Later.” The final part of our game play by play comes from that poem, where the mighty Casey is redeemed just as we are redeemed through Christ.

Can anything ever separate us from Christ’s love? Does it mean God no longer loves us if we have trouble or calamity? Will God stop loving us if we play poorly and lose to the other team? The eternal answer is a resounding, “No! Our fears for today, our worries about tomorrow and even the powers of hell simply cannot keep God’s love away.” (Romans Parts of 8:35-38)

There is the missing ingredient from my final message. No Scriptural Message is complete without this all-important promise. Whether we win or lose. Whether we play or sit in the dugout. Whether hitting a home run or striking out… nothing can keep God away. God’s grace will accompany us from the moment of acceptance to the forever of eternity.

Now, that’s a sure thing. One baseball game where God has already declared you a winner.