Competitive to the Extreme: King Herod

Christmas has come and gone… now what? How should we respond as the New Year begins? For answers we look to the story of the wise men. “About that time some wise men from eastern lands arrived in Jerusalem asking, ‘Where is the newborn king of the Jews? We have seen his star as it arose and we have come to worship him.’ Herod was deeply disturbed by their question…” (Mat 2:1-3)

Why was Herod so “deeply disturbed” by the questions of the wise men? Why did he feel so threatened? Answer: Herod was fiercely competitive… to the extreme.

For the first twelve years, Herod competed to establish his reign by eliminating hundreds of potential opponents including his wife and her two sons. During the next dozen years, Herod would rebuild the cities and towns and establish himself as one of Israel’s greatest kings. But it was the final nine years when Herod was at his worst. Hundreds, maybe thousands of people were executed including his brother. It was here that Herod received the wise men announcing the Messiah’s birth. Shortly after that visit Herod sent soldiers to Bethlehem to murder every boy in the community under two years old.

Confession time: I am also competitive… too competitive. My sister and I spent a lot of time together playing board games such as Monopoly, Scrabble and Life. It took her awhile to catch on to why her big brother was winning so frequently. Eventually she realized, the rules were subtly changing from one game to the next. (Larry, that is so low! I know. I know!) Whatever it took: I wanted to win. Ouch!

A competitive personality can be an asset of course. Competition fosters harder work and greater creativity. The success of our economy is driven by our competitive nature. The most exciting sporting events are those where the competitive rivalry between opponents is at its highest. Our democratic political system is based on at least two competitive office seekers slugging it out before voting day.

A competitive personality can also be treacherous. When you twist the rules, use unethical business tactics, deliberately injure an opponent or slander a rival you are being competitive to the extreme. At this point you cross a fine line that separates aggressiveness from brutality. If you feel compelled to lie, cheat or steal to get to the top of the heap… to stay at the top your brutality will only get worse.

Of course, none of us would ever be this competitive or feel this threatened… would we?

When a new employee is hired and they display extraordinary enthusiasm for their job do you rush to learn from him or encourage her? (Get real, Larry!) I doubt it. More likely, you feel threatened. You may even find yourself in a few back room discussions to find ways bring him/her back down to size. When a new member joins the church and suggests ways the church can improve or shows interest and talent in the area of the church you serve, do you look for ways to be supportive? Do you pull them aside and tell them we don’t do things that way around here? Do you talk behind their back?

Before I sound too smug, I attended a local pastors meeting recently and one particularly gifted new minister was enthusiastically sharing ideas for church growth. I remember leaning over and whispering to one of the other old fogy’s… oops, I mean ministers and whispering, “He’ll burn out in ninety days.”

Let’s be honest. We are all competitive to a degree. We occasionally feel threatened by new talent and fresh ideas. We all possess a little bit of apprehension that our position will be eliminated and we will no longer be needed. It is natural and very human to feel this way but competition taken to the extreme is a form of paranoia and is still very, very wrong. There is a little bit of King Herod in all of us.

The Christ child was born and soon the family was forced to flee to avoid Herod’s competitive fear. How many talented people do companies lose because other employees refuse to offer support? How many churches lose their young and gifted because long-time members refuse to adjust to new ideas?

The question is: What should we do next? How can you learn from Herod’s tragic mistakes? What will enable me to be more supportive of new people and ideas? Next devotion: Answers from the wise men. 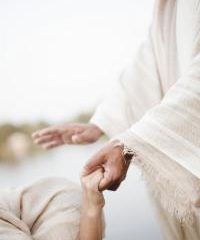