One Friday morning, years ago, Tabernacle United Methodist Church in Amelia County, Virginia burned to the ground. All that remained were cement steps leading to a few charred posts. Church members and bystanders could only stand and stare in shock; like witnessing the death of a beloved family member. 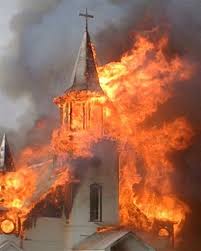 A church building represents ministry to the community and shared memories: baptisms, funerals, worship services, covered-dish suppers, meetings, children and youth activities and so much more.

We couldn’t stop staring at the ruined hulk that once represented an active church. We wanted to do something. But what? Our church canceled Sunday services to join the congregation at Tabernacle. We came to grieve and bring gifts of love. We came expecting a funeral, instead, we witnessed the miracle of a church being reborn!

The miracle for God’s church was just beginning!

The pastor described what happened, including a leadership meeting held just before the fire, discussing the idea of building an addition, which would include a fellowship hall and kitchen. Then he described the total shock of the fire and how he kept returning to the scene to make sure it wasn’t a nightmare.

Then, he paused and announced: “We will build a new church and this church will have our new fellowship hall and a kitchen.” Our mourning turned to enthusiasm as we cheered.

The pastor then described a stranger driving by who took all the money out of his wallet, handed it to him and vowed to come back with more. A cabinetmaker promised new cabinets. A carpenter volunteered his labor. A church offered their mission team. Another church offered free use of their building. Others donated hymnbooks and office equipment.

In the midst of the smoking ruins, a church began to dream and build toward the future. A miracle was quietly taking place.

Jesus asked the disciples, “Who do you say I am?” Simon Peter answered, “You are the Messiah, the Son of the living God.” Jesus replied, “You are blessed, Simon son of John, because my Father in heaven has revealed this to you…Now I say to you that you are Peter (the rock) and upon this rock I will build my church and all the powers of hell will not conquer it.” (Matthew 16:16-18)

We all learned a valuable lesson that morning. Churches and their vital mission in the community and world can easily be taken for granted. Sometimes, it takes a tragedy, like a fire to remind us of the vital role God’s church plays throughout our lives.

Over the next few months, there were countless miracles as Tabernacle United Methodist Church began the rebuilding process. What began as tragedy, turned into a miracle of rebirth as people and funds seemed to appear when needed most. 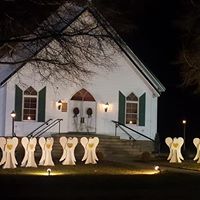 One year later, I attended another worship service: This time to dedicate a new building with a fellowship hall and a new kitchen. We celebrated a miracle of rebirth. In twelve months, money was raised, contractors secured and a new church was built on the ashes of the old. And… during the rebuilding, people became caught up in the enthusiasm. Worship attendance and membership nearly doubled.

As we prepare to celebrate Holy Week and Easter, we remember the horrible week Jesus endured. The betrayal by Judas, the denial by Peter, the arrest, the trial, the beating, the crucifixion and death. But three days later came resurrection and Easter. Christ died but out of that death came new life.

A fire destroyed a church building but out of the ashes came the resurrection of a new more vital church.

On the day of the fire, two white Easter Lilies were placed on the empty front steps of the burned-out sanctuary as a symbol of hope for rebirth. One year later a new church stood proud surrounded by hundreds of new Easter Lilies as a vivid reminder of how God creates new life from the ashes.

Thanks for sharing Larry, a Miracle it was & out of tragedy came rebirth. You & your church were so supportive. Again, thanks for taking us back.

Thanks Sandra. What a special year that was for you and your church.