Can’t We Hypocrites Get Along?

There was an article in the Washington Post about residents fighting at a retirement community in Orlando, Florida. It all started in 2016 when one resident slapped a “Dump Trump” sticker on her golf cart. I thought it was ‘America’s friendliest hometown’ like it says in all the brochures,” she said. “But it’s not.” Now, political fights lead at times to physical fights, prompting some septuagenarians to pack pepper spray and stun guns into their golf carts.

“It was never as ugly as it is now says one resident, who walks a tightrope between encouraging people to speak their mind and reminding them that outbursts won’t help. “People have lost friends. They’ve lost their social group. They won’t talk publicly, because they’ll lose their golf game. Now, there are battle lines drawn.”

After reading this, I didn’t know whether to laugh or cry. I assume many of these folks are Christians, but you wouldn’t know based on their actions. Hypocrites.

But if the truth be known, I am a hypocrite too. I can be arrogant and selfish. I have been known to stretch, conceal or slightly massage the truth. I am sometimes inconsiderate and insecure. My ego occasionally rages out of control and I battle foolish pride. I can be lazy and foolhardy with my time. I get angry, petty and ill tempered. I am sarcastic and cynical. I too, am a Christian but sometimes, you wouldn’t know it, based on my actions. Sigh… Hypocrite.

Brennan Manning writes: “The Greatest single cause of atheism in the world today is Christians who acknowledge Jesus with their lips then walk out the door and deny him by their lifestyle. That is what an unbelieving world simply finds unbelievable.”

The Bible makes a point of illustrating some pretty rotten hypocrites. David committed adultery and murder. Peter betrayed Jesus and the list goes on and on.

Humorist Will Rogers once noted that before a Native American would criticize another he would walk all the way around that person. He would look carefully to see what the view was from that person’s perspective.

Would it surprise you that the number one reason why people stop attending church usually revolves around a time they were deeply hurt by a fellow Christian?

We Christians have lost much of our witness because in many ways we are too much like the world we live in especially when it comes to expressing ourselves in tense situations.

When people don’t agree with you, it can be tough. It is a blow to our ego when someone thinks we are wrong on something we are convinced is right. So, how do we keep from letting our emotions get the better of us?

1 Peter 3:15 says, we need to argue with “gentleness and respect”. This is where the “love your neighbor” part comes in. Scripture tells us to maintain a loving attitude towards those who slander us. And, to disagree with someone peacefully then to pray for them.

Easier said than done but that’s why our relationship with God is such an important part of our faith. Treating people with gentleness and respect, loving our neighbor as much as we love ourselves, maintaining a loving attitude towards those who slander us, is impossible without God!

Paul says in Ephesians: “Let no corrupting talk come out of your mouths, but only such as is good for building up, as fits the occasion, that it may give grace to those who hear.” (4:29)

The lesson? Avoid insults and put-downs but instead be quick to listen, slow to speak looking to build up not tear down. Rather than seek a “win” focus on what is helpful for all.

We live in anxious times. Huge issues face us that will not be solved by arguments or elections alone. If we claim the title, Christian, we allow God to guide our words and deeds. You argue with kindness. We offer love instead of hate. Is this hard? Yes it is! Is it worthwhile? Definitely!

There are two questions we might ask ourselves every day:

1: Have I represented my title “Christian” in a way that glorifies Jesus?

2: If not, how can I repair the damage and/or do better tomorrow?

My favorite example in the Bible on how to deal with those who don’t agree with me is Matthew 10:14, when Jesus tells his disciples to “shake the dust off their feet” if no one wants to listen. Make your case, and if they don’t want to hear more, move on. Do not get upset, no fist fights, pepper spray, stun guns or ramming golf carts. Be a good ambassador by presenting the message with wisdom and good character. Let the Holy Spirit do the rest. Amen.

This site uses Akismet to reduce spam. Learn how your comment data is processed. 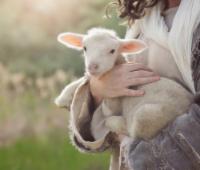 Christians Are Not Perfect

I saw a bumper sticker: Christians are not perfect… just forgiven. That phrase assures me that my primary purpose is to do my best and trust God. God honors effort, not perfection, attitude, not just results.