Published by larrydavies on August 9, 2014

The 9/11 Memorial is no ordinary tourist attraction. We were enjoying the sights and sounds of New York City but once we stepped on “Ground Zero” the laughter and chatter ceased. We were fellow mourners paying our respects. The 9/11 attacks killed 2,977 people from more than 90 countries. Everyone over the age of twenty still remembers where they were on September 11, 2001. How could you visit New York and not feel compelled to see where most of 9/11 occurred?

The 9/11 Memorial opened exactly ten years after the attacks. There are two pools set in the foundation of the former twin towers. Thirty-foot waterfalls – described in the brochure as the largest in North America – pour into the pools and then vanish in the center. 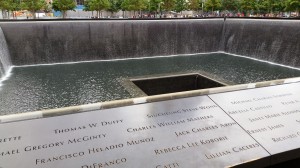 The names of every victim are inscribed in bronze around the pools. Not in alphabetical order as you would expect but based on “layers of meaningful adjacencies” that reflect where victims were on 9/11 or as relationships with others killed. To find specific names you go online or use a nearby electronic directory. Each name has a symbol beside it. For example: S-50 means South Pool, panel 50.

As I leaned over the wall to gaze at the waterfall, I couldn’t help but rub my hand over the engraved names and pronounce each one out loud. There were miniature American flags embedded in the lettering of a few. Some of the names were familiar. Like many churches, ours regularly listed the names to pray for their families.

Surrounding the pools are many precisely placed trees planted with the purpose of adding a sense of peace and serenity. All but one are Swamp White Oaks. But a solitary pear tree is the “Survivor Tree.” Badly damaged, near death, the tree was discovered by workers shortly after the tragedy and nursed back to health. The “Survivor Tree” is now over 30 feet tall and stands as a testimony to the fortitude of he survivors that is such an important part of the 9/11 story.

Also on the site is the newly opened, National September 11 Memorial Museum which has become the central location for preserving the history of the tragedy. Located in the space between the North and South Towers, the museum is designed to help you relive what happened that day but also chronicles the stories of the survivors as they and the city rebuild.

As you walk through the halls, you hear stories about the victims, recordings from 911 calls, interviews with survivors. You view dozens of media images and even touch objects found near the site. There is the Ladder Company 3 Fire Truck smashed by chunks of debris. There is the Giant Cross made of two steel beams tha stood at “Ground Zero.” There are sections of the original walls and even a damaged elevator motor.

One hall is called “102 Minutes: Events of the Day” that helps you relive moment by moment what happened during the 102 minutes between the impact of the first plane into the North Tower to the crash of the fourth plane in Pennsylvania. There is the “Tribute Walk” that presents many of the artistic tributes created in response to 9/11. 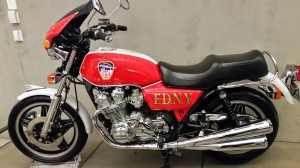 One my favorite exhibits displayed a beautiful motorcycle named the “Dream Bike.” According to the description… “Firefighter Gerard Baptiste purchased a battered Honda motorcycle. Baptiste believed that he could restore it to good working order. His fellow firefighters joked that it would take time and money just to start the engine. Following Baptiste’s death on 9/11, the broken-down motorcycle remained at the firehouse until a memorial tribute inspired Baptiste’s colleagues to restore the bike in his memory. Surviving members of the firehouse and motorcycle enthusiasts nationwide, transformed the motorcycle into a “bike of healing’ known as the Dream Bike. Ten roses painted on the cover of its gas tank symbolize the members of Ladder Company 9 and Engine Company 33 killed that day.”

Near the end of your museum tour, you are invited to watch a multi-screen 360 surround film experience appropriately named “Rebirth at Ground Zero” which uses time lapse footage and interviews to show the rebuilding and renewal of the World Trade Center site. Upon leaving the museum you can’t help but notice the newly built World Trade Center towering above the memorial and the museum grounds. 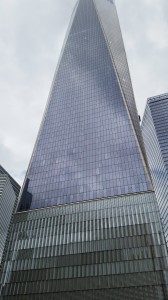 I came to “Ground Zero” to pay my respects but I left the 9/11 Memorial and Museum with a sense of awe and pride at the resilience and fortitude of the survivors, New York City and America. 9/11 will always be a tragic day burned into our memory forever but September 11 may ultimately be one of America’s greatest examples of triumph in the face of tragedy; accomplishment in the midst of destruction.

Paul wrote in a letter to the Corinthians, “We are hard pressed on every side but not crushed; perplexed but not in despair; persecuted but not abandoned; struck down but not destroyed.” (2 Cor 4:8)

The gospel of John puts it another way as a promise from God: “I give them eternal life and they shall never perish; no one can snatch them out of my hands.” (10:28)