Nearly 500 of us came from more than 50 countries to Durbin, South Africa. We met at Central Methodist Church, burrowed in the heart of the downtown sprawl and surrounded by street vendors and small businesses. From the outside, Central Methodist church looked more like an office building but as soon as you walked in the door, you knew God was in this Holy place.

First it was the singing: loud, boisterous and full of celebration.

Over and over we sang, first as they sing in South Africa, then English.

With the music in the background, we prayed: “This is the day that you have made, Lord. Help us to rejoice in it and be glad. Remind us of the privileges we enjoy as your people: to come to you in these moments, to confess our sins, to receive forgiveness and give it, to pray and sing and listen, to renew our fainting spirits, to rest in all your promises. Open our eyes to see you, Lord. Open our ears to hear your Word.” 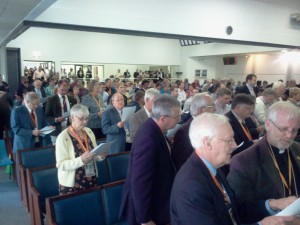 I’ve heard this passage many times but hearing it again in several languages and in the company of leaders all looking for answers added new meaning and new life to familiar words.

One hundred thirty years ago the first Methodist Ecumenical Council was held in London, England. Today the Council is composed of seventy-four member churches which have ministries in more than 132 countries. Forty-five million Church members and followers of Christ are engaged in ministry.

The World Methodist Council took action on several issues of importance to world Methodists, namely the adoption of a revised Constitution, election of officers including the first African General Secretary and the acceptance into membership of three new countries who established Methodist Churches: Gambia, Nepal and Tanzania.

The meetings were important but for me what really mattered was the opportunity to meet fellow Christian leaders from all over the world and hear their amazing stories. 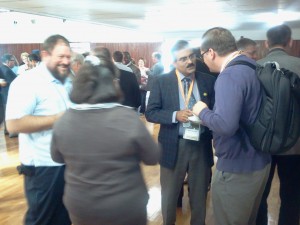 Then, there were the prayers, the singing and the inspired worship in the midst of every session, sometimes spoken in many languages but always full of energy and excitement. There were many languages, many cultures but in the end, we became one – one in spirit, one in Jesus. This song, author unknown is popular in Latin America.

“Disturb us, Lord, when we are too well pleased with ourselves; when our dreams have come true because we have dreamed too little; when we arrived safely because we have sailed too close to shore. Disturb us, Lord when with the abundance of the things we possess, we have lost our thirst for the water of life. Stir us, Lord, to dare more boldly, to venture on wider seas, where the storms will show your mastery; where losing sight of land, we shall find the stars. We ask you to push back the horizons of our hope and to push us into the future in strength, courage, hope and love. Amen.”

Only one god and only one Lord, gathered in one faith, by this one love, with only one baptism,

By the one Spirit; we are one people of God.

Standing among my 500 new friends from all over the world, I learned that we are all united in one faith, by this one love, with only one baptism, by the one Spirit; we are one people of God.