Before entering a Zulu village you must first walk through a long circular pathway surrounded by a massive wooden fence to end up at a gate. There you ask the guard for permission to enter. Until then you are considered to be the enemy and the villagers will fight to defend themselves. 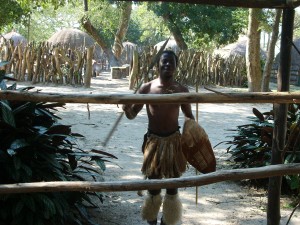 “Sanibona,” (Hi.) we shouted as a group to the warriors guarding the gate. The leader then asked for permission for our group to enter.

The warriors then opened the gate and said to us, “Ngiyanemukela!” (Welcome!)

As we entered the village, the guide continued to remind us that the key to being welcomed in a Zulu village was to seek to understand the customs and language. This was considered a sign of respect and common courtesy. At each station, we were taught new phrases.

My previous knowledge of the Zulu came from the old movie starring Michael Caine. As typical of movies in those days, natives were portrayed as simple and cruel savages. Entering this Zulu village in Saint Lucia, South Africa I was exposed to a culture rich with customs and traditions.

You can learn a lot by simply observing the clothing of the Zulu man or woman. For the woman, the articles of clothing and the colors of the beads will tell you whether she is married or single, in love or enduring a tragedy. For the man, the placement of the clothes and the design of the headdress will tell you whether the man is poor or wealthy and the level of success achieved.

After visiting each station, we learned to say, “Ngiyabonga.” (Thank you.)

And they would reply, “Kulungile.” (You’re welcome.)

As the tour progressed, I learned more of the modern story about the people who were portraying Zulu villagers. Our guide was a student at the local university using his salary to finance his education. Many of the warriors and villagers were also local students. By this time, the villagers were smiling and helping us try on the ceremonial clothing. They posed for pictures with us and answered questions. There was a lot of laughing and horseplay. 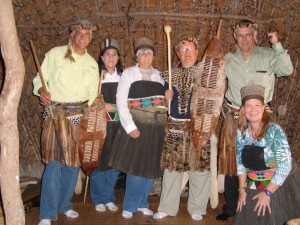 Dressing the Part of the Zulu Village

Finally, we were asked to take a seat in the center of the village to watch a demonstration of stick fighting which is a sport used to prepare warriors for combat. Two warriors would face off with a stick and shield. The object was to get past the shield and hit the warrior with the stick.

The highlight of the tour was the dancing and singing which is an integral part of Zulu culture. Each dance symbolizes something happening within the clan. The rhythmic beating of the drums and the intricate movements tell a story of victory or defeat, love or love lost. As we watched and listened, we began to appreciate the passion and energy of the Zulu culture. 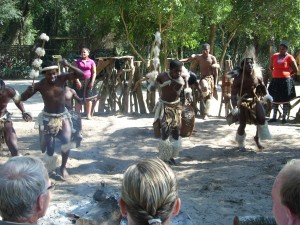 The Passion of the Zulu Dance

I learned a valuable lesson as we walked through the Zulu village.

Paul says in First Thessalonians: “Make it your goal to live a quiet life, minding your own business and working with your hands, just as we instructed you before. Then people who are not Christians will respect the way you live.” (4:11-12)

Paul is teaching us how to be Christians in the everyday world where we live, eat, run errands, go to school and work. Every day, God gives opportunities to witness what we believe. These opportunities only come when each person or group can learn to show respect for the other.

What I learned touring the Zulu village was the importance of first showing respect for who they are and what they represent and then and only then will we earn the right to witness our faith.

We entered the Zulu village through a long circular fence before approaching the gate as strangers asking fierce warriors for permission to enter. We left through another gate with no fence, open and unguarded. We left, not as the enemy or strangers but as friends.