This week, we celebrate Memorial Day, a time to remember and honor those who died defending our country. Several years ago, Jan Reger, reminded me to also remember the families of those listed as “Missing in Action.” You don’t hear that term mentioned anymore. Iraq and Afghanistan conflicts list very few military personnel as MIA but as Jan reminded me. “Not so, years ago.” Her brother was listed as MIA in Vietnam.

I asked Jan to tell me more about her brother:

On May 13, 1970, just days before turning 30, my brother, Captain Alan R. Trent, USAF, was shot down over Cambodia. He was the lead pilot in a Phantom jet hit while going in to blow up a bridge. The plane went down and exploded on impact. A scout plane did not see any parachutes but reported the two crewmen may have ejected without the chutes opening since they were close to the ground. They went down in enemy territory so US forces weren’t able to get to the crash site for four days. By then, the enemy cleared away any evidence the pilots were in the plane. There were no human remains so we were hopeful they either got away or were captured. But after the war ended and POW’s returned, he was not among them, nor was he ever on any lists so his status was changed to ‘Killed in Action.’ But no one ever determined what happened. 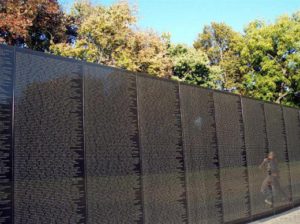 Alan was single and a graduate of the Air Force Academy. He planned to go into the ministry before joining the Air Force. His plans were to come back from Vietnam and enter seminary to become one of the first “flying chaplains” in the USAF. His faith in God was so strong.

In 1996, Red Cross investigation teams entered Cambodia and found the crash site. They had to dig down through three levels of forest but located several parts of the plane, a BIC pen, and a military boot among other things. They found a portion of one ejection seat, so they felt at least one pilot went down with the plane. Then in 2000, the Air Force investigated another crash site nearby and discovered more pieces of Alan’s plane. They determined his plane hit a knoll, bounced off and exploded in another area. There were pieces spread all over but still no indication as to what happened to either pilot. The Air Force sent a book containing pictures of flight uniforms, straps, rubber life rafts, pieces of the plane, etc., found at the crash site but found no evidence of bones or burial sites.

So that’s where we stand. We know nothing more about him today than on May 13, 1970. My dad died in 1982 accepting Alan’s death but mom felt the reason she lived so long was to be here when Alan comes home. She too died not knowing. It is so hard to accept even now. Alan’s name is now on the Vietnam Memorial Wall in Washington, D.C. My mother saw it once but would not go back. I don’t really blame her.

I became involved with the Families of American POWs/MIAs and served for several years. I attended conventions with other families, most of whom still don’t know what happened to their loved ones. There are hundreds still unaccounted for in Southeast Asia.

I don’t get to talk about my brother much anymore. It’s so hard to keep his memory alive. Vietnam was such an awful time in our history and people don’t want to talk about or deal with the “leftovers” of such a war.

On Memorial Day, we remember and honor those brave men and women who died serving our country as well as those still missing. We remember their families and friends who grieve.

From a blog about Captain Trent by Linda Crist

Linda Crist wrote about Alan: “You have no grave, only your name etched on a long, black granite wall with over 58,000 others. There is a simple cross etched in the stone by your name. It tells the world that you are still missing. I still wear your bracelet and look forward to the day I can put it away forever. I know there will be no good news at the end of this journey but we owe it to you to put a circle around that cross on the wall. That’s what they do when remains are identified. I hope you know that there are still many who care. They wear buttons, fly flags, and stand in solidarity with other mothers, and brothers, wives and sons, husbands and daughters, fathers and sisters who still wait for answers.”