Over two thousand representatives, including six of us from Virginia entered The World Methodist Conference in Durbin, South Africa. Led by the Africa University Choir, we sang a South African song, “Siyahamba” and clapped as we welcomed the parade of banners symbolizing Methodists from nearly sixty countries and from every continent except Antarctica.

In addition to singing South African songs, we also were challenged to learn South African words to share with our friends and family as we returned home. 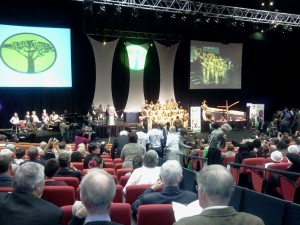 Rev. Ivan Abrahams, Bishop of the Methodist Church in Southern Africa and newly elected General Secretary of the World Methodist Council said, “South Africa is a place of myths, legends and folklore where nothing, not even the horrors of apartheid, could break the indomitable spirit of a resilient and passionate people who, like Paul and Silas, knew how to sing at midnight. We sing when we are happy and celebrate, we sing when we are sad and face conflicts and challenges. We sing at birth and sing in death. We are deeply spiritual people.”

Rev. Abrahams went on to say, “Here you will see extreme wealth and grinding poverty existing side by side. Here, if you look and listen carefully to the beautiful sights, sounds, art and culture, Africa will come alive and you will experience something new. It is my pleasure to welcome you home – to the cradle of humanity.”

The World Methodist Conference logo features the Baobab tree often called Africa’s “Big Tree.” The Baobab tree is revered for its medical and healing properties. In ancient times, leaders would gather under the “Big Tree” to make important decisions. Not only did the tree provide shelter but it was believed that the spirit of the tree would help to make wiser decisions.

The theme of the World Methodist Conference is “Jesus Christ for the Healing of the Nations.” Former General Secretary of the All Africa Council of churches, Rev. Dr. Mvume Dandala asked, “How can we offer healing when we have not identified the illness? The illness is in a world where violence is often being embraced as the sole solution to political differences. Dandala urged the church to reclaim its position as the moral compass of the world, to not only condemn socio-economic injustices but to actively champion the changes they hope to see.”

World Methodist Council President, John Barrett spoke of three traditional areas of Methodist mission – evangelism, education and social action – and how they have progressed since we last met, five years ago.

Rosalind Colwill, a champion of mental health care in Nigeria, was the recipient of the Methodist Peace Award. Colwill initially worked with leprosy sufferers but encountered many leprosy victims with mental health problems. She gathered support locally and internationally and developed a pioneer project in a small village in the Southeast of Nigeria, Itumbauzo, called “Amaudo” (Village of Peace) which began in 1990. Other recipients of the award include former South African President Nelson Mandela and former President Jimmy Carter.

“Stop Hunger Now” organized a 100,000 meal packaging event in the midst of the conference. Ray Buchanan, President, challenged the conference to help him put a stop to world hunger within his lifetime. The 100,000 meals were pledged toward schools in the local area and to Somalia and other parts of Africa severely affected by drought and civil war. 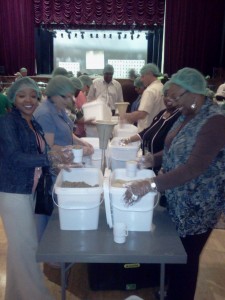 A bus load of delegates delivered school supplies collected from the World Methodist Conference to three local schools to be distributed among needy children.

Part of the mission of the World Methodist Conference is to make us all aware of what it is like to be in ministry within South Africa. In the halls and throughout the conference were numerous display areas featuring worthwhile community projects. At any display you could receive information, hear stories or buy crafts all used to support ministries throughout South Africa.

On Sunday there were visits to local churches throughout the Durbin area followed by a parade where more than 3,000 of us marched from the conference center to the courthouse of the city. 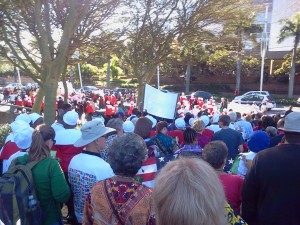 On the final day, we said our good bye in a service of Holy Communion, led by Rev.  Dr. Paulo Lockmann, the incoming president of the World Methodist Council. He said, “We have to work together to counter the challenges that affect us worldwide. Not only should we stop hunger now, we should also stop violence now, stop war now, stop disease now” referring to the Stop Hunger Now campaign that packed 100,000 meals for Africa.

Jesus said in Matthew 2818-20, “I have been given all authority in heaven and on earth. Therefore, go and make disciples of all the nations, baptizing them in the name of the Father and the Son and the Holy Spirit. Teach these new disciples to obey all the commands I have given you. And be sure of this: I am with you always, even to the end of the age.”

The World Methodist Council and World Methodist Conference serve to remind us that what we do in the local church matters not only in our own community but also throughout the world. In the midst of the worship, meetings, classes, speeches, Bible studies, parades, tea breaks, acts of ministry and fund raising we saw God’s Holy Spirit moving in large and small ways throughout the world. We saw example after example of lives forever changed by the grace of God.

Finally we were taught by out South African friends how to say goodbye in Zulu: