A Child Sacrifice: Why?

One of the first people you meet in the Bible is Abram later changed to Abraham. At the tender age of 75, he’s told to pack up his tent pegs and move. God adds; “oh by the way, you are also going to be a father.” A father? A father at 75?! Is God kidding?

But Abraham hears this promise at least four different times. Once while God is talking, Abraham can’t control himself any longer and falls on the floor and laughs, so does his wife Sarah… can you blame them? A child at their age?

But, sure enough, Sarah gives birth to a son and they name him, Isaac which means, (Are you ready for this?) ‘…laughter.’ In other words, God bided his time and eventually had the last laugh. Doesn’t he always?

So, Isaac was more than a child. He was the fulfilled promise of God. Which is why what happens next makes no sense.

One day the Lord says to Abraham, “Take your son, your only son – yes, Isaac, whom you love so much – and go to the land of Moriah. Sacrifice him there as a burnt offering on one of the mountains, which I will point out to you.” Wait a minute! Sacrifice your child? (Abraham’s story comes from Genesis 22 New Living Translation)

A professor once asked if this story took a stand against child sacrifice? It was pretty common in those days.

Well… if you are thinking about sacrificing your child, I guess it’s good to have this case on the docket. I know we parents have our moments but I don’t imagine many of us would seriously stoop to that. Would you?

So, Larry, what is the real point?

Maybe God was using this story to prepare the world for a different kind of sacrifice. One offering that would be sufficient for us all. Compare the story of Abraham’s only son, Isaac with the story of God’s only Son, Jesus and you begin to see a clear picture of what God intended from the beginning. Let me show you:

Jesus: “Jesus took a loaf of and asked God blessing on it. Then he broke it in pieces and gave it to the disciples saying, “Take it and eat it, for this is my body.” And he took the cup of wine and gave thanks to God for it. He gave it to them and said; “Each of you drink from it for this is my blood, which seals the covenant between God and his people…” (Jesus story comes from Matthew 26, New Living Translation) Body, blood, covenant… Jesus, we don’t understand?

Abraham: The next morning Abraham got up early and saddled his donkey… On the third day of the journey, Abraham saw the place in the distance. Is Abraham really going to do this? Will he sacrifice his only son, the child of God’s promise?

Jesus: Pilate tried to set Jesus free but the Jews kept shouting…”Crucify him!” Are you really going to let them do this, God? Isn’t there another way? Can’t you stop it?

Abraham: Abraham placed the wood for the burnt offering on Isaac’s shoulders, while he himself carried the knife and the fire. As they went on together, Isaac said, “Father, we have the wood and the fire, but where is the lamb for the sacrifice?” “God will provide a lamb…” Abraham answered.

Jesus: Then they lead him away to be crucified. Is Jesus the lamb?

Abraham: When they arrived at the place where God had told Abraham to go, he built an altar and placed the wood on it. Then he tied up Isaac and laid him on the altar over the wood. You can’t let Abraham do this God… Isn’t there another way?

Jesus: At noon, darkness fell across the whole land until three o’clock. At about three o’clock, Jesus called out with a loud voice, “Eli, Eli, lema sabachthani?” which means, “My God, my God, why have you forsaken me?” But does it have to be this way?

Abraham: Then Abraham took the knife and lifted it up to kill his son as a sacrifice to the Lord. At that moment the angel of the Lord shouted to him from heaven. “Abraham! Abraham! Lay down the knife. Do not hurt the boy in any way… Then Abraham looked up and saw a ram…”

Jesus: Then Jesus shouted out again, and he gave up his spirit. At that moment the curtain in the temple was torn in two from top to bottom. The earth shook, rocks split apart, and tombs opened…The roman officer and the other soldiers at the crucifixion were terrified by the earthquake and all that had happened. They said, “Truly, this was the Son of God!”

Can you imagine the agony and pain Abraham felt preparing to sacrifice his only child, the fulfilled promise of God? Can you now understand God’s anguish watching His only Son suffer and die on a cross?

The story of Abraham and Isaac dramatically points the way toward another child sacrifice. The only one, God would allow.

We were spared because God spared Abraham and chose to make the sacrifice himself as an undeserved gift… for you and me!

Are you feeling a little speechless at this point? So am I.

Now comes the real question: “The gift has been given, how will we respond?” 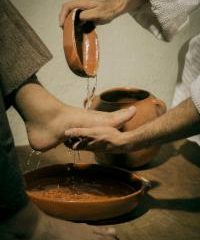